A Boy’s Memories of the 40′s
First in the RG Bud Phelps Life Series books, Gibbon’s Secrets is a historical fictional tale about a boy growing up in a small town during and after World War II. Through the fun of a fictional setting, Bud shares real memories of the home front.

“Rose and Jimmy did not want to wear out their welcome so after they had the opportunity to talk a bit after supper Rose said, ‘Pastor Paul and Kathy, I want you to know that Jimmy and I have just adopted you as part of our family.’ Pastor Paul laughed. ‘You beat me to the punch there, Rose.’” –From Gibbon’s Secrets, by Bud Phelps
“Grandpa Claar was the section foreman for the area known as the Gibbon Switch. His job as section foreman required his attention and leadership; to assure that his section of track was capable of handling the train traffic through this area. His crew was known as ‘Gandy-Dancers’.” –From Gibbon’s Secrets, by Bud Phelps
“V-J Day arrived August 15th, and that glorious day finally ended World War II. Bud and Sonny, along with practically the entire town of Curtis, danced in the streets and marched past the city park down Main Street. The high school marching bank from NSA led both parades.” –From Gibbon’s Secrets, by Bud Phelps

To purchase Gibbon’s Secrets or other titles by RG Bud Phelps visit our online store.

Back in the Day

High School, Summers in Between, and Four Years in the Navy
Second in the RG Bud Phelps historical fiction ‘life Series’.  This book covers the years from 1945 to 1955. The historical fiction account is based on his personal memories of growing up in the Middle-American town of Curtis, Nebraska. The story, which parallels Bud’s memories from high school through his service in the U.S. Navy, represents the memories and experiences of thousands of Americans who grew up in the same era.

Excerpts from the historical fiction book, Back in the Day, by RG Bud Phelps

“A boy couldn’t ask for a neater place to grow up than Curtis. With the beautiful hills to roam, and Fox or Medicine Creek to go fishing in, what more could you ask for? Sometimes we would go out to Aggieland with a sack lunch of peanut butter and jelly sandwiches, and maybe an apple.” –From Back in the Day, by Bud Phelps
“I had a crush on another one of the cheerleaders, Daisy Bartlett, and I’d had this crush since the 8th grade. Both Vicky and Daisy were always nice to me, but I don’t think they really knew about my true feelings toward them. I was too chicken to make them known. But I took every opportunity possible to dance with them at all of the school dances.” –From Back in the Day, by Bud Phelps
“The two Corsairs came out of the sun majestically, and one released its rockets and pulled away perfectly, but the second Corsair failed to pull out of the dive and crashed into the ocean to the horror of everyone watching. A quiet came over the crowd, especially our VC-4 crew. The pilot of that second Corsair was very young and very close to the same age as I was.” –From Back in the Day, by Bud Phelps

To purchase Back in the Day or other titles by RG Bud Phelps visit our online store. 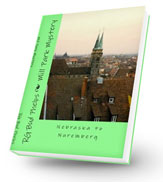 Nebraska to Nuremberg
In real life, Bud Phelps visited the places mentioned in this historical fiction book and he incorporated many of his memories into the details of the engaging mystery story. The tale begins with a murder and a mysterious black-hatted man in a small Nebraska town. The story’s heroes follow the man’s mysterious path through many years and miles to Nuremberg, where they bring the mystery to a startling and satisfying end.

“It was 5:30 AM on a beautiful summer day when Reg Philso and George Cornelli met in the Curtis City Park. They were all decked out in camo gear and each carrying their 22 rifles and a surplus army pack stuffed with a canteen, a hearty lunch, and other things they might need.” –From Mill Park Mystery, by RG Bud Phelps
“There was somewhat of a stir in Curtis because one of the familiar town characters, “Blacky” was missing. No one ever knew where Blacky came from when he arrived in Curtis in the late 40’s. He had a makeshift “shack” not too far from Mill Park that he had built out of thrown away building materials along with those supplied by caring individuals.” –From Mill Park Mystery, by RG Bud Phelps
“George had drawn a rough sketch of a map of Old Town Nuremberg showing the Train Station on the bottom right and the Castle on the top left. The dotted line from the Train Station up toward the Castle was his first thought as to the route they could take. The big X on the map was nearest to the wall off of the large street in back of the Castle, but there were three small x’s, one near the Church of Our Lady, one near the Rathaus, and one near the Durer House.” –From Mill Park Mystery, by RG Bud Phelps

To purchase Mill Park Mystery or other titles by RG Bud Phelps visit our online store. 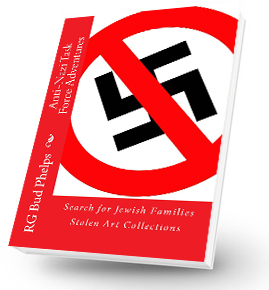 From the point that “Mill Park Mystery” ends, follow the continuing adventures of Reg and George, who have been assigned by a special task force to search for private art collections taken from Jewish families during WW II. An exciting tale of intrigue and romance. 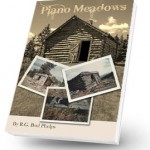 The year was 1870 and Joe, a young cowboy traveling to Colorado, was seeking gold and adventure. He was raised as a Christian and followed his father’s teaching to be humble, honest, and fair with his fellow man. Especially not to be judgmental. Joe had followed newspaper accounts of the Pikes Peak Gold rush in Colorado and was obviously touched with the “Gold Fever” like so many other young men of this time., from Piano Meadows, by RG Bud Phelps
The year was 1870 and three Mormon families from Nauvoo, Illinois were making this Salt Lake City trek to fulfill their dream of living with a strong contingent of dedicated Mormons. They were led by their Elder from Nauvoo, Joshua, whose wife and fourth child had died in childbirth, eight years ago. Joshua’s family consisted of his brother Tom 25, one daughter Mary 20, and two sons Joseph 18, and Jeremiah 16., From Piano Meadows, by RG Bud Phelps
The year was 1970 and a family from Wheatridge, Colorado made the decision to move to the mountain area, Conifer. This family consisted of the father Bud 38, the mother Pat 37, and three daughters – Bridget 13, Shauna 11, and Wendy 9. The family had taken many trips to the mountains on weekends; cooking breakfast near mountain streams, or packing picnic lunches. One weekend they took a drive up Turkey Creek Canyon, ending up in Aspen Park where they saw a huge sign next to a reality office advertising mountain lots for sale. Bud and Pat said, practically at the same time, “Let’s check it out!”, From Piano Meadows, by RG Bud Phelps

To purchase Piano Meadows or other titles by RG Bud Phelps visit our online store.