I have been very fortunate to have been associated with The Author Show for a long period of time and have appeared in four of their previous “50 Great Writers You Should Be Reading” publications.  Danielle Hampson and Don McCauley have been very helpful in assisting me in the promotion of my books and allowing me to be interviewed on their, The Author Show, for five of my books; Gibbon’s Secrets, Back in the Day, Mill Park Mystery, The Anti-Nazi Task Force Adventures, and this year Piano Meadows.

Piano Meadows is a Historical Fiction story about a specific area in Conifer, Colorado; called Shiloh.  The story is written about the historical significance of being Pioneers in both the 1870’s and the 1970’s.  The first part of each chapter, dating back to the 1870’s features a young ranch-hand/cowboy from Nebraska seeking gold in Colorado.  The second part of each chapter, also dating back to the 1870’s features three Mormon families from Illinois wintering in Colorado on their way to Salt Lake City.  The third part of each chapter dating back to the 1970’s features a young family moving from Denver’s suburbia to a newly developed area with Conifer called Shiloh.  This story is not about Christian or Mormon beliefs but instead their Pioneering spirit.  The 1870’s were restless times because of the movement across this great country of men seeking gold, and many family groups seeking free land and/or a place to practice their own beliefs.  The 1970’s found this young family spending weekends up in the Colorado Mountains to the point that they made the decision to build a home and live up there.

Piano Meadows can be purchased on the Amazon website – http://amzn.to/2hiqrBZ

Or for a signed copy at the buds books website –  http://bit.ly/1m7qThe 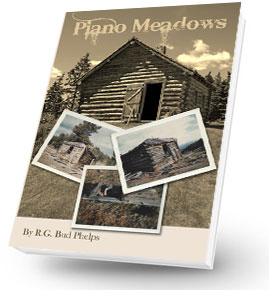